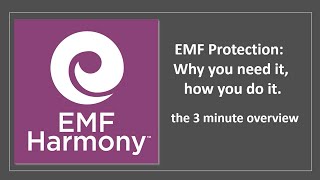 The first question you will likely ask is "Why do I need to worry about protecting myself from exposure to electromagnetic radiation?" (Also known as EMF or RF radiation.) The answer is that the health consequences of the pervasive electronic pollution in our environment is now affecting everyone living in our modern world - including you, whether you realize it or not. Below is a short summary of what you need to know, followed by references for further reading if you are interested.

You Are an Electromagnetic Being

Your body uses electrical signals to accomplish every function vital to your health, from your heartbeat and brainwaves to cell growth and sensory perception. Electrical waves flow throughout your entire body, generating electric current that in turn generates biologically relevant magnetic fields. Thus, you are an electromagnetic being, and the EMF’s measurable in your body confirm this. Modern medicine, in fact, relies on these measurements for many diagnostic tools, from the electrocardiogram (EKG) to magnetic resonance imaging (MRI).

The health of your cells, now recognized to be critically important to your overall health, is also associated with electromagnetic fields. Narrow micro-currents (with approx. 60-70 microamps) flow through your body along organized paths and ensure your well-being. Any injury or illness – as well as EMF radiation – can disturb or interrupt this energy flow. “Non-health" is thus often caused by disturbances at the cellular level resulting in changed cellular electrical current. You do not “feel” or “see” these cellular disturbances, so it is normal to not recognize the consequences of them. However, as described above, you are an electromagnetic being, and constant exposure to unnatural electromagnetic radiation does change cellular behavior, and can therefore impact your health.

And of course the fact that EMF’s are used therapeutically in conventional medicine in many ways – from magnetic field therapy to trans-cranial magnetic stimulation to pulsed electromagnetic field (PEMF) therapy – demonstrates that EMF's can and do affect the human body. Here are some examples of studies and/or statements issued by government institutions related to health consequences from exposure to EMF radiation:

In addition to this list of studies and research by government organizations, there is a large body of evidence demonstrating various health consequences from EMF exposure from researchers and scientists from universities and research institutions from around the world, some of which can be found here:

You may also, of course, find studies that do not demonstrate negative health consequences from EMF exposure. There are many variables that affect the outcome of what is generally a complex issue to study. It is up to you to evaluate the research and its preponderance and sources on each side of the issue and decide for yourself.

You may wonder why the government does not create strict regulations to protect us against the potential health consequences of electromagnetic radiation exposure. There primary reason is that regulators tend to focus on very narrow aspects of EMF’s and health. Regulations for EMF safety consider only the thermal effects (heat related) of non-ionizing radiation (the type used by the electricity in your home, your cell phone, your WiFi router, etc.) and they assume that if it does not create enough heat to damage your cells, then it is therefore safe.

Here are a few of the problems with that approach:

An official from the Environmental Protection Agency admitted in a letter in 2002 that "The FCC's exposure guideline is considered protective of effects arising from a thermal mechanism but not from all possible mechanisms. Therefore, the generalization by many that the guidelines protect human beings from harm by any or all mechanisms is not justified." (reference here)

There are actually some countries that have recognized the potential risks of EMF exposure and have enacted regulations to lower them. In the European Union, the legal limit for electric field exposure is half what it is in the U.S., and for magnetic fields is almost 90% lower. In Chile and New Zealand there are limits on placing cell phone towers near schools. In France it is possible for individuals and communities to fight the placement of cell phone towers near their homes or schools, as opposed to here in the United States where it is illegal to fight the placement of such towers (thanks to the lobbying efforts of the powerful telecommunications industry). In fact, in the U.S. it is not uncommon to find cell phone towers placed on the roof or exterior walls of a school!

To make matters worse, we are now seeing the introduction of 5G cell phone technology in the United States. While there are plenty of documented health consequences from the electromagnetic radiation emitted by the few towers spread around town broadcasting the older 3G and 4G technologies (reference here), 5G relies on much higher frequency electromagnetic radiation emitted by many small antennas spread at short intervals along every street. A good overview of 5G health concerns can be found here.

The situation is summed up very well by Dr. Robert Becker, the pioneering scientist who spent his career studying the electromagnetic basis of the human body, and author of the book “The Body Electric”. He wrote this summary in the chapter warning of the dangers of EMF radiation at the end of his book, after reviewing his life’s research leading to the conclusion that we are in fact electromagnetic beings. And bear in mind that this was written in 1985, even before the advent of cell phones and WiFi. This is a clear indication that the dangers of electromagnetic radiation extend even to more conventional electromagnetic frequencies:

“Subliminal activation of the stress response is one of the most important effects that EMF’s and non-ionizing radiation have upon life, but it’s far from the only one. These unfamiliar energies produce changes in nearly every bodily function so far studied. Many of these alterations are associated with stress, but whether they’re a result of, or an additional trigger for, the adrenocortical reaction is an irrelevant chicken-or-egg question at this state of our knowledge. The most disturbing data come from work on the systems that integrate other bodily functions – the central nervous, cardiovascular, endocrine, and growth control systems...

The major problems come from extremely low frequencies, but higher frequencies have the same effects if pulsed or modulated in the ELF range. This is very often the case, for, to transmit information, microwaves or radio waves must be shaped. This is done by interrupting the beam to form pulses or by modulating the frequency or amplitude (size) of the waves.

Furthermore, today’s environment is a latticework of crisscrossing signals in which there’s always the possibility of synergistic effects or the ‘construction’ of new ELF signals from the patterns of interference between two higher frequencies. Therefore, experiments in which cells or organisms are exposed to a single unmodulated frequency, though sometimes useful, are irrelevant outside the lab. They’re most often done by researchers whose only goal is to be able to say, ‘See, there’s no cause for alarm.’”

If you need more convincing, we encourage you to review some of the many studies documenting the health consequences of electromagnetic radiation exposure. It should become obvious that the sheer number of studies from so many diverse countries and respected research institutions showing such varying detrimental health consequences makes it an issue that we all need to consider. Below are some resources for learning more about EMF's and your health: